Suspended from a helicopter hundred meters above the ground, german artist stephan zirwessurveys political and social situations through his aerial photographic work. One Londoner could win the chance to have contemporary artist Yayoi Kusama transform their Airbnb into an immersive, livable work of art. In a collaboration with the Tate Modern, the project invites London-based Airbnb hosts to apply for one room in their listing to be customised by one of Japan’s most renowned artists.

‘Let Yayoi Kusama turn your bedroom into an immersive work of art’
It’s Nice That | May 5, 2016 | Jenny Brewer On May 3, Lisson Gallery New York will open beneath the High Line between 23rd and 24th Street. Designed by studioMDA and Studio Christian Wassmann, the 8,500 square foot space is split between a gallery, offices, viewing rooms, and storage. Although the main gallery is directly under the High Line – the steel columns in the photos are actually supports for the elevated railway – it will receive ample sun from dramatically angled skylights along the space’s edge, which also aid to extend the walls vertically. The gallery’s polished concrete floors, white walls, and natural light are typical of today’s contemporary art spaces, but also maintain the aesthetic of Lisson’s other galleries. The public will access the space via 24th Street, while the 23rd Street entrance will be reserved for staff purposes and private functions. Born in 1915, photographer Genevieve Naylor started in New York City where she moved at the age of 18. After the war, the photographer works for magazines such as Vogue and Harper’s Bazaar, and builds her own visual identity that make her an artist with a very special aesthetics. Mashable paid tribute to her stunning portraits made in the 40s, showing women whose style and elegance remain timeless. Great and not at all scary news, art world: A recent study published in the Personality and Individual Differences journal concluded that you may want to be wary of the artists, actors, and musicians in your life, seeing as they often share certain neuropsychological features with individuals exhibiting “psychopathic traits.” Phoebe Rudomino is a photographer who isn’t afraid of get wet to go capture elegant women portraits or celebrities behind her diving lens. She got specialized in behind-the-scenes stills and video for cinema, TV and advertising. She worked on many aquatic movie shootings like Skyfall, Casino Royale, Atonement, Harry Potter and The Boat That Rocked. As contemporary art continues to evolve the gallery space has become as important as the pieces themselves in helping an artist guide the viewer through the world they have feverishly perfected. The recent obsession with ‘pop-up’ spaces that continue to sprawl across London has lead to some interesting experiments in art curation, but also a worrying swarm of gallery spaces existing just to buy into the lucrative industry.

The CNB gallery is a curious concept, located in a former Victorian tramshed beneath another of chef and restaurateur Mark Hix’s ventures. On paper the idea of combining food that has strongly aesthetic qualities with contemporary art has potential. The basement gallery, a dimly lit room with concrete walls spruced up with a lick of paint, sits awkwardly underneath the dining area. I felt like an intruder creeping down the stairs past the staff room and stumbling into the empty, incredibly dreary room. The opening blurb described the ‘intense deep blue’ walls as ‘lending the photographs an environment evocative of a journey to another place’, which reading back now sounds just as ridiculous as when first read. The whole place was a bizarre set-up and felt completely disconnected from the low hum of the diners above. However, a first glance at Peter Newman’s photographs transported me out of the shadowy basement and into the vivid landscapes. The choice of images in fact revealed a clear appreciation of contemporary art first hidden by the underwhelming space. 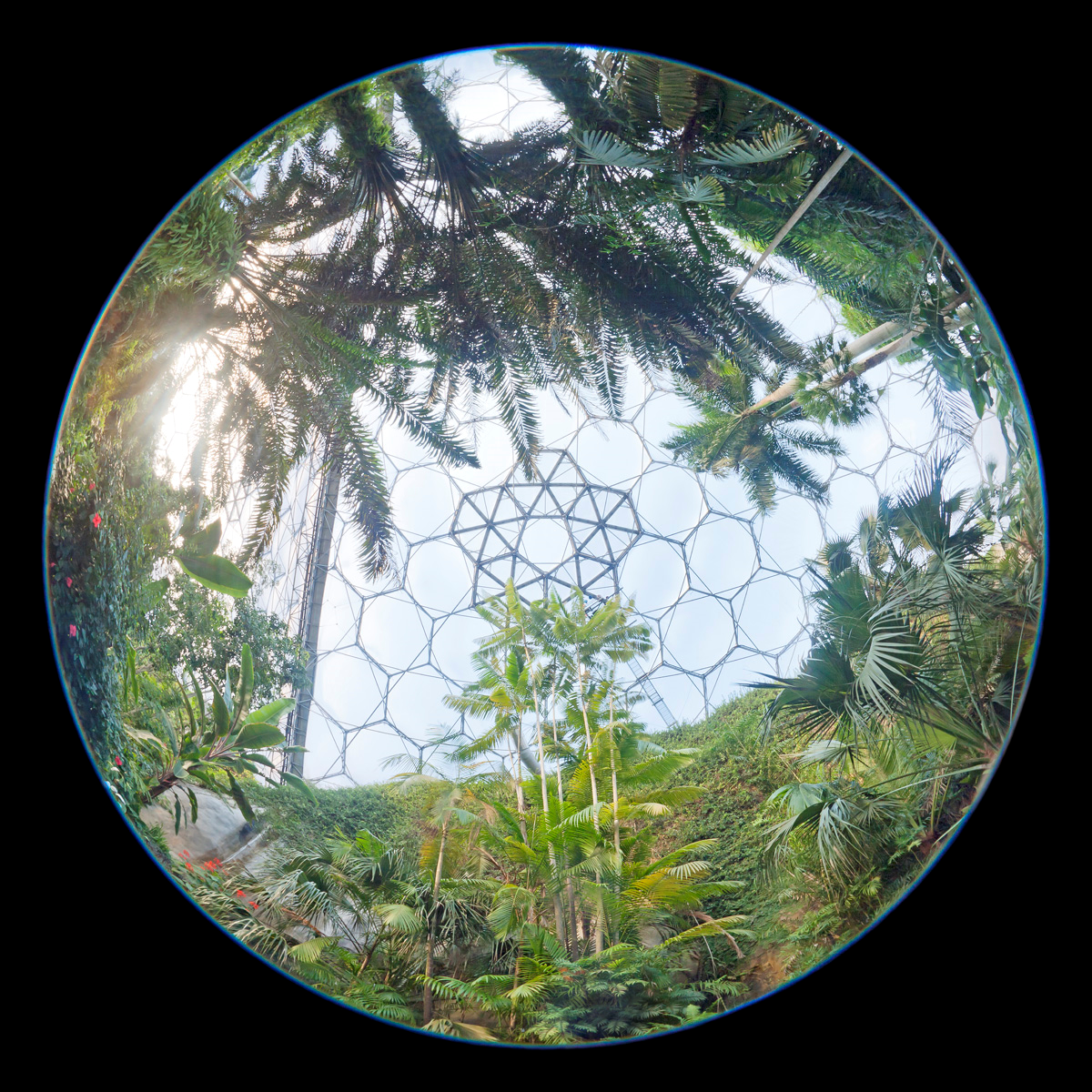 ﷯Subterranean Blues comprises of eight large-scale chromographic prints, forming part of Newman’s Metropoly project. Newman uses his photographs to examine a broad spectrum of architecture from across the globe, featuring recognisable scenes including the Eden Project and La Defense in Paris. The composition of spherical images sitting against pitch-black gives the impression that the image is floating, as if momentarily suspended in a dark abyss. The effect is an interesting twist on the traditional ‘cityscape’ as Newman plays with perspective to explore how our physical relationship to the world relies heavily on searching for vantage points, where all elements combine to form a full landscape. It is hard not to find yourself becoming a struggling voyeur absorbed in each scene as your eyes dart around the photo in an attempt to find a familiar source of perspective. The periscopic vista in each image is achieved through the use of panoptic lens that creates a sense of claustrophobia as the structures loom over you, distorting your sense of reality. Newman’s clear mastery of traditional elements of photography allows him to manipulate the medium and instil modernity through the provocative view captured. It could be said that the subdued room was merely the bare bones to which Newman’s work added the flesh, but I couldn’t escape the feeling that the vibrant photographs deserved more room to flourish.
Located at the CNB Gallery underneath Hix’s Tramshed, Shoreditch.
32 Rivington Street, London, EC2A 3LX
24 November – 14 February
www.cnbgallery.com